My Take On Hunting

Posted on December 12, 2013 by travismohrman

I recently made a comment about not enjoying the whole “killing” part of hunting.  I didn’t think much about it because I’ve said it for years, but several people asked me why I hunt if I don’t enjoy killing.  I thought this might be a good time to explain myself. 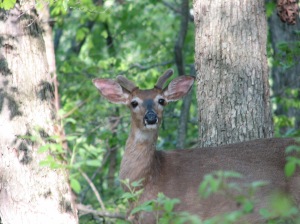 “Are you making fun of the size of my antlers?”

I kill an average of five deer a year.  The vast majority of our meat is deer meat, the only exception is a pig I buy from a friend every year who raises them on pasture and treats them with compassion and respect.  That said, No, I don’t like killing.  I love hunting, don’t get me wrong, but there is so much more to hunting than just releasing the arrow or pulling the trigger.

“You ever have that feeling that you’re being watched?”

I sit outside nearly all year long and read books, write books, talk with friends, play with dogs, etc…but except for when I’m hunting, I never just sit in the woods for hours, watching.  It seems simple to say, but it’s actually hard to do.  I am sitting there, either up in a stand or against a tree trunk, and I’m not moving.  After a mere 15 minutes, the forest seems to forget you are there and begins going about it’s business.  This is the forest humans rarely get to see.  How is it possible that a deer can walk through thick, dry, fallen leaves and barely make a sound, but a single squirrel sounds like a parade of little kids rolling on their sides down a hill?

“Stay away from my man!”

We have all seen squirrels play, but it’s a different thing entirely to see them play deep in the woods when they have no clue you are there.  They steal acorns from each other and then try and get them back, even though the forest floor is littered with them.  I have seen armadillos plod along, bobcats stroll by, turkeys purr to each other.  I once had a flying squirrel land about a foot above my head.  That time freaked me out more than a little. I have had Pileated woodpeckers hammering on the tree I was in, throwing wood chips all over the place.   It was actually kind of scary to have a miniature dinosaur that close to me, but also thrilling. 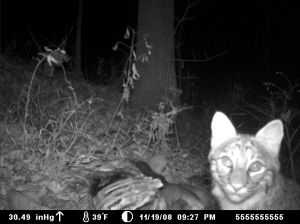 Bobcat figured out exactly where the infrared trail cam was. Clever girl.

These are the things that make hunting amazing.  One of my favorite memories was watching a coyote trot under my stand and over to the carcass from a deer that had died in mid summer.  The coyote seemed to try to get the deer skeleton to play with it.  He was nipping at the bones and running away, trying to incite a chase.  His tail was wagging furiously the whole time.  Eventually, a big red-tailed hawk landed low and started screaming at the wild pooch.  The coyote decided it was time to leave, but in an instant of extreme snark, he whizzed on the carcass before leaving, just to let the hawk know the score. Even better though, he then ran 50 yards and took a poop and then did the exact same half-assed “I’ll cover this up with grass” leg kicking technique that my hound dogs do after they poop.  I always figured the hounds were just terrible at it.  Apparently it’s a universal canid failure.

Opossum or Skeksis? I can never tell.

These are the things that make hunting a special time.  The killing is not fun, but after spending seven years as a vegetarian, I know that I want meat.  My mindset is that if I’m going to eat meat, then I need to be the one to kill it.  It’s a means to an end, several ends really.  Deer are overpopulated here, so by killing them as quickly and humanely as possible, I am getting myself meat as well as helping the ecosystems that I love (and lowering the disease spreading tick numbers).

I would bet, if you could get them to answer honestly, most hunters don’t relish the kill as much as everyone thinks.  We are not full of bloodlust.  Many hunters care far more for animals than the average person.  We care enough that we want to be the ones to kill them.  That way, at least we know they weren’t mistreated any more than necessary.  We don’t want our meat to grow up in horrible conditions, being pumped full of weird chemicals in some concentrated animal feedlot operation.

“”Hey, Lama, hey, how about a little something, you know, for the effort, you know.”

Please don’t think for a second that hunters don’t also think deer are beautiful.  We do.  With the exception of a handful of days out of the year, we are just as happy to watch them walk around and nibble on things as everyone else.  The thing is, we know that we have a part in the food chain.  We know that they are prey and we are predators.  Sure, we could eat only vegetarian or vegan options, but for me anyway, my environmental footprint is MUCH smaller by eating wild meat versus out of season produce from a far away land (in winter it’s pretty hard to find local produce in Missouri). 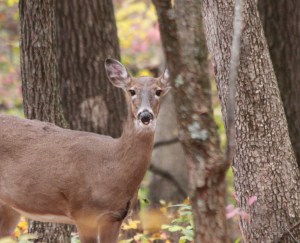 I’m not saying any of this to judge anyone else.  If you are a vegan or if you subsist strictly on a diet of diabetic cow liver, do what works for you.  This is my explanation of why I hunt.  It works out very well for me and my family, so I plan to continue doing it for as long as I can.

1 Response to My Take On Hunting