Posted on February 4, 2014 by travismohrman

So, as has been said many times by folks with much more delicate prose than myself, this winter blows.
Don’t leave!  This is not a post bitching about winter.  Well, hang on…..&*(^$&(*)#*)!!!  and then )*&*& to your $*)&^%*^ all over your ear!
Ahhhh….ok, NOW it’s not a post bitching about winter.
I actually enjoy winter and this one has had lots of snow, which is pretty cool.  Also, I got to lay in a hammock when it was 10 below zero and read a book (until the cold made my Kindle sleepy).

No, this post is about the song that breaks winter’s back.  It happens every year, right around this time.  February is a rough one for me.  It’s the last “gray month” here in Missouri and right around this time I start craving green foliage pretty bad.  While I don’t get to see any, a friend of mine reminds me that it’s coming with a simple whistle. 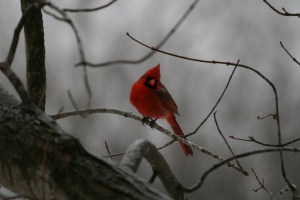 Yes, the Northern Cardinal (Cardinalis cardinalis).  Every year right around this time, he gets fed up with the cold gray woods too.  Instead of sulking.  Instead of eating a mound of garlic mashed potatoes and unbuttoning his pants.  Instead of drinking enough to make his skin physically warm.  Instead of all those things, he chooses to sing.  And make no mistake, the female sings also and she has just as spectacular a voice as the boys. 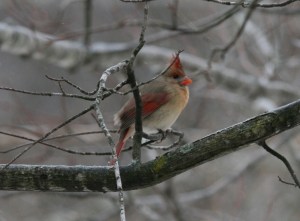 I don’t know what actually makes winter go away,  (okay, yes I do, but let’s allow our brains to have fun here) but I think the Cardinal’s songs scare it away.  Cardinals are actually very mean, oversized finches and their lilting song is probably the bird version of LL Cool J’s “Mama Said Knock You Out”. 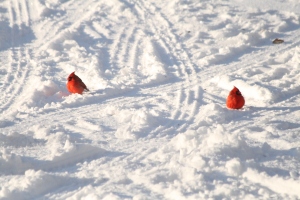 We shall stomp away the snow!  Hup, Hup, Ahup, yes keep it up, we’re winning!

It all starts on a warm and sunny day near the end of January or early February.  The cardinals will alight on a tree branch and start calling out to each other.  Frankly, people around here do just about the same thing on those unseasonably warm days. People get back outside, turn on their leaf blowers (why!?!?  stop it!!!) or do other outdoor chores.
What makes the plump little redbird special is that unlike people, he doesn’t stop when winter comes barreling back in.  After that first warm snap, the songs have begun and will not cease. 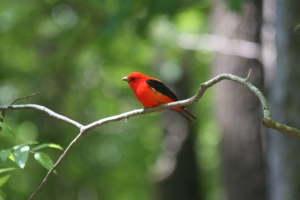 Several days ago it was 15 degrees outside and I was pulling the ice out of the chickens “heated” waterer.  I’ll admit, I was grumbling.  My fingers were cold, my joints were aching, and my cheeks had that strange frozen feeling going on.  Then, up in the trees, I heard a Cardinal call out.  It changed my whole day.  He or she reminded me that winter’s back was now broken, even if it doesn’t always seem like it.  Things have started that will not end until the forest is fully green and filled with action.  If that little guy can sing out, so can I.

In a way, the Cardinals are kind of like the Who’s down in Whoville.  Spring lives inside them.  The current conditions will not stop them from singing.  They know the growing season is coming, even if somedays it seems too far away to imagine.  I think we all should take a lesson from the Cardinal.  Not the lesson that we should attack side mirrors on vehicles, I’m talking about the singing.  You know what? What the hell….If that mirror has been pissing you off, go ahead and beat it up.  I don’t care. 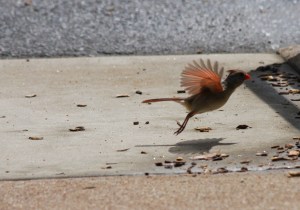 As we here in the midwest stare down the barrel of yet another storm system, try to remember the fat little bird out there, singing and singing and singing.  They’re chasing winter away.  For that, we owe them some gratitude (and maybe some extra sunflower seeds). 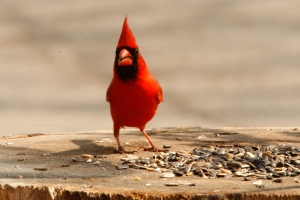 4 Responses to Winter’s Broken Back